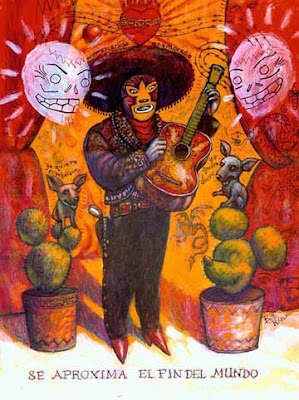 Here are a couple of pieces influenced by Mexican art. A a painting of a masked Mexican wrestler mariachi encircled by Day of the Dead spirits and imagery. Part of the fun of painting "Enmascarado," aside from working with such a lurid palette, was toying with attitudes and stereotypes about Mexico in the United States--from the Chihuahuas from TV commercials to the wrestling mask of La Lucha Libre, to the Disney-fied cacti--this piece is a bright and bracing shot of tequila with a sangrita back! Mexico is a land of contrasts, with itself and its neighbor to the north--a situation that explains the Mexican lament "¡Pobre Mexico! ¡Tan lejos de Dios y tan cerca de los Estados Unidos!" 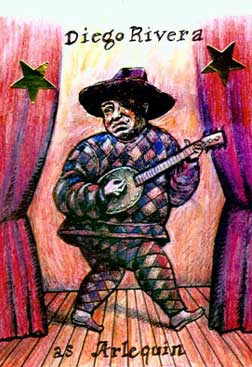