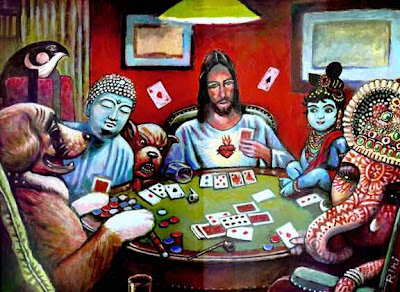 Never eat in a place called "Mom's," and never play poker with the gods, or even demigods -- regardless of their religion. This piece is an obvious riff on the old "Dogs Playing Poker" calender illustrations. I painted it for the "Gods and Monsters" show at Roq la Rue, a hipster gallery and the flagship of the pop surrealism movement in Seattle.

The best way to leave a casino with a million bucks is to start with two million.
Posted by Bob Rini at 8:31 AM

CONCEPT DRAWINGS FOR AN INDIE FILM 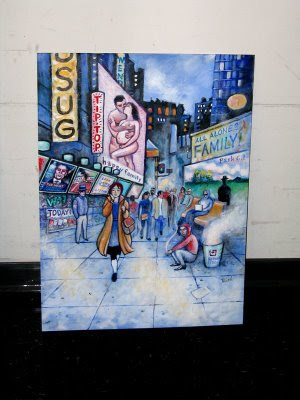 This Fall, David Miller and Derick Avitt commence production of an indie film, "Love in the Year 2000." According to David Miller, this is "a visionary science fiction film set in the future. The ambitious production will create a work of bold post-modernity, entirely relevant to the present in which we live."

The goal of concept drawing for film is to help visualize the script and "concretize" this world about to be created. The trick is keeping it fresh and not relying too heavily on the conventions of the genre. As you can see, the final painting never strayed far from the original concept, though more details were added from the script by screenwriter Miller, who was available to help me flesh out his written words.

This illustration, and other examples of my concept art, were used in the film as well as the trailer.
Posted by Bob Rini at 11:03 AM